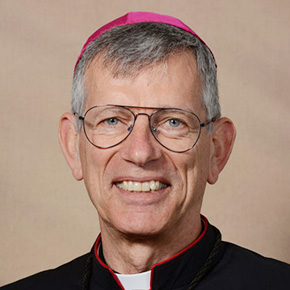 Appointed by Pope Francis on 26 May 2020  as Sixth Bishop of Wagga, Bishop Mark Edwards OMI was received at a Liturgical Reception and Solemn Mass at St Michael's Cathedral on 22 July 2020.

Mark Stuart Edwards OMI was born in 1959 in Balikpapan on the island of Borneo in Indonesia the first child of Graham Edwards from Adelaide, who was working there in the oil industry, and his wife Christina (aka Tineke) from The Hague in Holland. They returned to Australia in 1962 and the family, to which were added in due course Keith, Karen (now Herford) and Donald, moved several times before settling in Melbourne in 1968. A parishioner of St Leonards in Glen Waverley and Holy Saviour, Vermont South, he attended Saint Leonard’s Primary School Glen Waverley and later Mazenod College, Mulgrave, where he made his first contact with the Congregation of the Missionary Oblates of Mary Immaculate who conducted the College.

Deanery
Wagga Wagga
Contact
205 Tarcutta Street, Wagga Wagga NSW 2650
02 6937 0003
bishop@wagga.catholic.org.au
wagga.catholic.org.au
About Us
Youth + Young Adults
Safeguarding Children + Vulnerable People
Together Magazine
Diocesan Provident Fund (DPF)
Seminary + Vocations
Giving
Directory
SRE & Catchesis
Parish News + Events
Contact Us
We use cookies on our website to give you the most relevant experience by remembering your preferences and repeat visits. By clicking “Accept All”, you consent to the use of ALL the cookies. However, you may visit "Cookie Settings" to provide a controlled consent.
Cookie SettingsAccept All
Manage consent