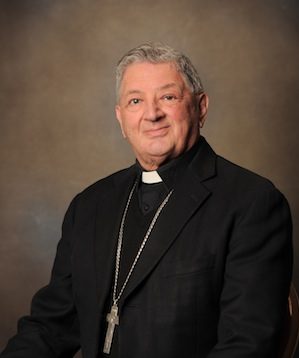 Bishop Gerard Hanna retired from his position as Bishop of Wagga Wagga in September 2016.

Born in Armidale New South Wales in 1941, Gerard Hanna studied for the priesthood at St Columba’s College Springwood and St Patrick’s College Manly, attaining a Post-Graduate Diploma in Pastoral Theology from Heythrop College, University of London. He was ordained a priest on December 9, 1968 at Sts Mary and Joseph Cathedral Armidale.

Bishop Hanna was a priest in the Armidale Diocese before his appointment as Bishop of Wagga Wagga. He was consecrated Bishop in Joyes Hall Wagga Wagga on 15th May 2002 .

Bishop Hanna retired in September 2016, moving to his home town of Armidale to spend his retirement years with family.

As the Bishop of the Diocese of Wagga Wagga, I was frequently asked: “What do you see as your most pressing challenge?” In this leadership role I hold, that is a question that framed so many situations that required a considered response. In answer to that question I offer an anecdote entitled: “Ears to Hear”.

It was high noon in the large city, and the streets were, as usual, buzzing with crowds, cars, taxis, horns blowing, brakes screeching, sirens wailing. Two men were making their way together through the crowd. One was a native of the city, and the other a visiting farmer. Suddenly the farmer stopped in his tracks. “Hold on,” he said, “I hear a cricket.” His friend replied, “Are you kidding? Even if there were a cricket around here, which isn’t likely, you would never be able to hear it over all this noise.”

The farmer remained quiet for a few moments, then walked sever

al paces to the corner where a bush was growing in a large cement planter. He turned several leaves over and found the cricket. The city man was flabbergasted. “What great ears you have,” he said. “No,” the farmer replied, “it’s a matter of what you’ve been conditioned to listen for. Look, I’ll show you.” With that, he pulled a handful of coins from his pocket and let them drop to the footpath. As if on signal, every head on the block turned. “You see,” said the farmer, “you hear what you want to hear. It’s a matter of what you’re listening for.”

In a secular or post-Christian world, the challenge emerges, namely: How do we get people to listen to us? History will not support the proposition that there was one Golden Age in the life of the People of God. The context in which we live our faith is ever changing. We are called to speak to a society constantly in a mode of change and innovation. In a pluralist, democratic society the social order is not necessarily shaped in accordance with Christian values; but Christians are entitled equally with others to contribute to its shaping. We earn our place in this society and take nothing for granted. It is incontestable that the relationship between the Church and society continues to change; it certainly has over the period of time represented by the generations here this evening.

This simple fact gives rise to a number of questions; eg:

How ready are we to accept the likelihood that faith will not again be a large scale phenomenon that dominates our culture as it did in a previous age?

How ready are we to accept that, in the future, the churches will be at least complementary or even a sign of contradiction to the dominant culture?

And what of our culture? Is it in decline? Those who speak of Decline of our Western Civilization point to the mounting love of show and luxury, a widening gap between the very rich and the very poor. An obsession with irresponsible sex. Most of all there is a developing moral numbness to vulgarity, violence and the assault on the simplest human decencies.

The symptoms of decline may also be read into the selective indignation with which people protest about environmental pollution without appearing to extend their concern to the widespread destruction of nascent human life itself. The insensitivity of this course of action together with the current rage to believe that we have found the secret of liberty in general permissiveness undermines that value system to which we adhere – one that demands self-discipline, selflessness and the kind of service to each other of which Jesus Christ spoke when he set down the commandment: “to love one another as I have loved you.”

But for all this – there is hope.

All our democratic institutions remain intact. The original structures that have brought us this far still have great vitality. In this we take too much for granted. Peace in our world is not secured by governments being allowed to dictate policy in isolation from the voice of the person in the street. The corporate wisdom of ordinary people speaks the language of common sense born of the everyday experiences of people living and working in the field.

As a People of God, - a Church – we recognise that our world is one beloved by God; we recognise our moment in history and embrace opportunities that are presented to us, confident that we are called to “speak the truth in lo

As Christians we are to engage in serious dialogue with other faiths in order to promote values which, together we believe are fundamental to the good of society. We are, too, a Community of Faith and seek to offer more opportunities for prayer: private prayer, liturgical prayer. This is our “core business” and we need to be more confident, even assertive, in offering the richness of our respective traditions, while, at the same time, seeking ways to bring prayer into the market place. We face up to the challenge to promote respect for human life at every stage of its existence and we provide a robust intellectual and pastoral care to students at every level of their life journey.
We are people who choose to follow in the footsteps of Christ; hence we reach out in such a way that people will listen to a church, a community of faith, striving to remain relevant and credible. We present an age-old word of truth – the message of Our Lord Jesus Christ in a spirit of Renewal, Reform, Reconciliation and Healing.

My prayer this evening is that you will be held and in turn hold, someone in love; and that by this gesture you will know the reassuring peace that overrides anxieties, fears and those dark moments of life; in fact, that peace spoken by the One who promised peace – a peace this world cannot give; the One who said this is my gift to you, do not let your hearts be troubled or afraid.

I conclude this evening with the same words that

The third millennium of the Christian era is upon us and we affirm our faith and hope in the lasting values of the Gospel proclaimed…..I spoke at the conclusion of my Episcopal Ordination in May 2002. I said:
“Jesus Christ, the same yesterday, today and forever”   -
is the inspiration for St Paul’s certainty and ours that:

Neither death nor life, no angel no prince
Nothing that exists, nothing still to come,
Not any power or height or depth,
Nor any created thing
Can ever come between us and
The love of God made visible in
Christ Jesus Our Lord.

Position
Bishop (Retired)
Deanery
Wagga Wagga
Contact
C/- PO Box 473, Wagga Wagga NSW 2650
About Us
Youth + Young Adults
Safeguarding Children + Vulnerable People
Together Magazine
Diocesan Provident Fund (DPF)
Seminary + Vocations
Giving
Directory
SRE & Catchesis
Parish News + Events
Contact Us
We use cookies on our website to give you the most relevant experience by remembering your preferences and repeat visits. By clicking “Accept All”, you consent to the use of ALL the cookies. However, you may visit "Cookie Settings" to provide a controlled consent.
Cookie SettingsAccept All
Manage consent