As part of the work being undertaken to oppose and stop the passage of the Voluntary Assisted Dying Bill 2021 through the NSW Legislative Council, an ePetition has been launched.  The ePetition is short and unambiguous.  It reads as follows:

“To the President and Members of the Legislative Council, the petitioners of New South Wales state that that they are completely opposed to the passage of the Voluntary Assisted Dying Bill 2021, in any form, which provides for state sanctioned/funded assisted suicide/euthanasia. A cornerstone of our legal system is that ALL human life has inherent value and must be treated with dignity and respect. The petitioners request that the House unanimously oppose the bill, in any form, and reject it.”

The following link will take you to the Legislative Council’s ePetitions webpage where you can directly access the ePetition https://www.parliament.nsw.gov.au/lc/pages/epetitions-list.aspx.

Please note those signing the ePetition need to declare that they are a resident of New South Wales.  The ePetition has been launched and closes on 25th April 2022.  Thereafter, it will be presented to the Legislative Council.

Those completing the ePetition are encouraged to use the icons to share on social networks.  It is important that we all take advantage of this to help maximise participation in this important ePetition.

Don’t put it off until later.  It only takes 2-3 minutes to complete.  Go to the ePetition now, sign it, pass it on and promote it as far and wide as you can.

​In his Feb. 9 general audience, which was dedicated to the Christian approach to death, Pope Francis warned against both the futile prolongation of life and the artificial acceleration of death through so-called assisted dying.

“After having done everything that is humanly possible to cure the sick, it is immoral to engage in futile treatment,” the pope said during his speech.

He praised efforts of palliative care to help the dying be more comfortable, but also cautioned that “we must be careful not to confuse this help with unacceptable drifts towards killing.”

“We must accompany people towards death, but not provoke death or facilitate any form of suicide,” the pope said, saying “the right to care and treatment for all must always be prioritized, so that the weakest, particularly the elderly and the sick, are never discarded.”

“Life is a right, not death, which must be welcomed, not administered. And this ethical principle applies to concerns everyone, not just Christians or believers,” he said.

The practice of “accelerating the death of the elderly” has become a common, he said, and lamented that in some cases, “we see in a certain social class that the elderly, since they do not have means, are given fewer medicines than they need.”

“This is inhuman,” he said, and rather than helping the elderly who are sick, “it is driving them towards death earlier. This is neither human nor Christian.”

The elderly, he said, ought to be cared for “as a treasure of humanity: they are our wisdom.” Even if they can’t speak or no longer make sense when they do, “they are still the symbol of human wisdom,” he said, and begged society, “Please, do not isolate the elderly, do not accelerate the death of the elderly.”

(Article below from CathNews 8 February 2022) 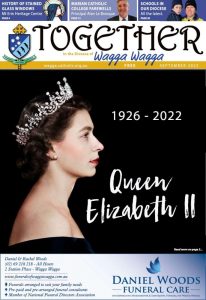 About Us
Youth + Young Adults
Safeguarding Children + Vulnerable People
Together Magazine
Diocesan Provident Fund (DPF)
Seminary + Vocations
Giving
Directory
SRE & Catchesis
Parish News + Events
Contact Us
We use cookies on our website to give you the most relevant experience by remembering your preferences and repeat visits. By clicking “Accept All”, you consent to the use of ALL the cookies. However, you may visit "Cookie Settings" to provide a controlled consent.
Cookie SettingsAccept All
Manage consent